Polygamy and the single, desperate woman 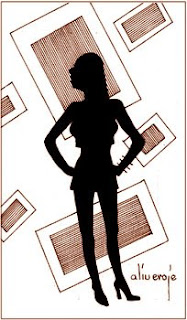 It's a Saturday night. We are dressed in our sexy little outfits, high heels, make-up, hair fresh from a salon touch up. We are financially independent women, all four of us, and tonight, though no one dares to say it out loud, may be the lucky night-the night we attract Prince Charming. We arrive at the location very close to 1am, even though the party started at 10pm. African time is still practiced religiously among Nigerians in New York. Arriving later than everyone gives us the advantage of being noticed. We become the new faces for the men who have gotten used to the same girls dancing in little clusters of circles, showing off but refusing to give up anything-at least in public. But as we stroll in into this bar with a dance floor, swinging lights and 2face's African Queen blasting from the DJ booth, there's the major possibility hanging over my head that there will be more of us than them.
In scoping the room after many hugs and kisses from expectant friends, I discover I am right. The proportion is even more out of balance than I thought. The room holds a ratio of about seven girls to one guy. It's no wonder women are finding it harder and harder to attract a potential suitor! I surprise myself with that sudden mental outburst. After all, I am an independent woman and just like my girls, I do not need a man to have fun. So I do what almost every girl in the room is doing at this point, dancing solo or with her fellow sisters-shaking our booties, raising our hands in the air, some of us with drinks in hand-all in our mid 20's and up, still partying like we were in college.
After a couple of drinks, I realize I am actually having fun. Maybe, I do not need Prince Charming to have a good time. In that state of resignation, I notice a fellow just walk in. He is not tall or big or anything, yet in my view, his presence is strong. He sits quietly at the bar and watches the scene. There's no sense of desperation in his cinnamon complexioned face. I can tell he is not really scoping out chicks. He is just chilling on a Saturday night with a stripped shirt and brown khaki pants. He looks so responsible, so out of place here among a group of drunken, partying people. With alcohol still swimming in my head, I walk up to him. I strike up a conversation, where is he from, what does he do, who did he come with? To my delight he becomes quickly engaged in the discussion, and in a few minutes, we are laughing and leaning on each other. Pretty soon we are dancing by the bar-though he needs a little bit of prodding before he complies. A quick look across the dance floor and I notice there are women who are watching me. Some of them probably thinking to themselves, "I wonder how she was able to catch one just like that!"

I spend the next few hours talking and dancing with my new friend. I have so much fun with him, I do not notice my friends when they leave. Side note for women: Never leave your friends behind! At 4 am, there are only about five people left, my friends are gone and I panic for I do not know how to get home. I voice my concerns, and he says not to worry, he will drop me and a couple of female relatives at our homes. In the car, I in front and the girls in the back, the females voice what had been on my mind earlier. They complain about the lack of men in that gathering and the fact that it is not a once in a while thing, but a common occurrence to walk into an event and find that their gender outnumbers the other sex. They are in their late twenties, and openly, they lament that they are tired of being single, they want a serious relationship-a husband. My friend and I giggle quietly in the front as we listen. And even in the midst of my smiling state, I cannot help but think that maybe the solution to this problem is a lot simpler than we realize. It is a solution that our ancestors practiced and that is still used in many parts of the world. It is a solution that solves the problem of adultery and ensures responsibility in many facets of society-Polygamy!

What if African men in all societies where women outnumber them are encouraged to marry more than one wife? Polygamy offers women eager to marry the opportunity to have a husband, children, a home and a sense of security that an otherwise single life cannot provide.

Polygamy has become less in vogue with each generation. Let's keep it real, sharing a man is not romantic. Can you imagine how the movie Titanic would have turned out if Leo had multiple girlfriends/wives as the target of his affections? Polygamy may seem to favour men more than women however, in an ideal polygamous situation, the man must treat his wives equally and be able to provide for them and the many children he may produce through them.

I dare to bring up this idea to the girls, but I change my mind. I do not want to shatter their romantic notions of everlasting love between one man and one woman as the ideal and the only way for a marriage to truly be a marriage. So, instead I join them in their rants. I take quick glances at the perceptive looking man holding the wheels, a subtle smile across his face; I wonder what he feels about us women right now. I also hope that he is not the polygamous type.