Arguably one of the most popular places in the country, Ajegunle has been described as a community that epitomises the entity called Nigeria. It is a community that swims in the pool of neglect, tragicomedy and absurdities. 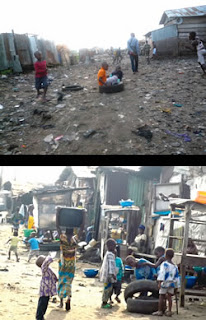 It shares certain similarities with communities such as Trenchtown in Jamaica as well as the slums in the northwest and southeast regions of Soweto, South Africa, where many residents rank among the poorest in Johannesburg.
Also known as AJ City, Ajegunle is a Yoruba word which literarily means 'fortune has landed.' Therefore, in a community that has such an enviable name, one would ordinarily expect to easily find an evidence of fortune.
However, the situation at Ajegunle is far from what its name suggests. It is a community that exudes raw poverty, neglect, infrastructural decay and squalor. It is not uncommon to see houses, especially those on a street called Olodan, off Ezeagu Street, built with planks on a piece of land which is so soft that by merely walking on it, one would have a sensation of sinking.
Such shacks are usually 'painted' with old carpets which are cut like ribbons and pasted on the shacks with glue. Rows of tube-like structures made from corrugated aluminium sheets which serve the dual purpose of toilets and bathrooms can be seen standing just a few metres from the shacks just at the edge of a huge canal covered with plants and filth.


All an individual who wishes to answer the call of nature needs to do is to defecate inside a black polythene bag and afterwards 'shot-put' the content into the canal, which, needless to say, reeks of human filth.

Nigeria's comedians have over time adduced the word 'pikin,' which is the general Nigerian Pidgin English word for a child, to children of the poor or low-income members of the society.
They probably had Ajegunle in mind when formulating this idea, as virtually every kid in Ajegunle is usually referred to as a pikin. "Na where you put my pikin," one woman was heard yelling at a young girl in one of the sections visited. 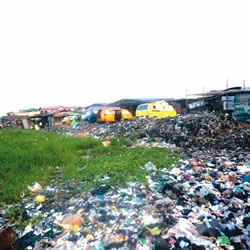 Curiously though, true to what has been comically portrayed by various comedians, Ajegunle pikins are very strong, healthy and energetic, as they can be seen always running and playing around, almost half naked without a care in the world. How they manage to look healthy and strong despite the sea of refuse that surrounds them still remains a mystery.
A group of kids were spotted playing at Olodan Street, where it was the turn of a young boy to retrieve a ball he had been playing with his colleagues from the canal. Like a flash, the young boy expertly waded his way through the murky water of the canal which was full of faeces and other filth. Beaming with smile, after taking hold of the ball which had been smeared with blackish fluid from the canal, the boy hurled it back to his colleagues and the play continued.

At another section, a young boy was seen rowing paper boats he had made in an open flowing gutter, while at the same time, at the other end of the gutter, a much younger 'pikin' was busy emptying his bowels into the same gutter.

Like Nigeria, the strength of Ajegunle lies in its ethnic diversity as virtually all major tribes and religions in the country are well represented; there are numerous Yorubas, countless Ibos, many Efik and Ibibio natives as well as a handful of Hausas, among others. They have all been co-habiting for decades with very few recorded cases of rancour or in-fighting.
If the birthplace of pidgin English in Nigeria, as opined by some people, is Warri in Delta State, then its place of maturity is Ajegunle, as it is very common to see everybody - adults, young men and women, including pikins speaking fluently in pidgin English without batting an eyelid.
Young men gather almost every evening to enjoy a game of football which is played on busy roads where goal posts are marked with huge stones or broken blocks.
In one incidence at a popular street called Nosamu, scores of people had gathered round a bunch of sweating young men who were busy playing football barefooted on a busy road. At the sound of a coming vehicle, they would all momentarily make way for it to pass, while play resumed soon after. 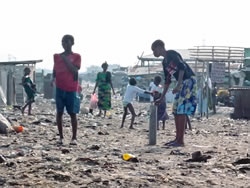 Perhaps in line with Robert Louis' Stevenson poem -Little play in grassy places- Children grew to be kings and sages," it was gathered that it was from such football competitions played in the streets of Ajegunle that popular footballers such as Taribo West and Emmanuel Amunike developed and honed their football skills and prowess.


Apart from serving as the place of birth and childhood of these Nigeria's soccer greats, Ajegunle, just like Trenchtown in Jamaica which was the birthplace of the legendary reggae singer, Bob Marley, also accounts for a number of other established stars, especially those in the music circle such as the "If you see my mama" crooner - Daddy Showkey.
No other place is the phrase 'no dull moment' better fit than Ajegunle, as evident in its night life, for as early as 7.00pm, hundreds of bars spring to life in a very competitive atmosphere, each bar tries to outdo the other in songs and style.
Places such as Mba street, Saint Mary Lodge, Godo, Achapko, among others have many residents who are from the eastern part of the country, therefore, it is not uncommon to see different umunna meetings (town folk meetings), where cola nuts and liquor are shared amid shouts of "Igbo kwenu," on Sundays.
Prostitution is rife at Ajegunle, as there are scores of brothels and cheap hotels where dozens of young ladies in skimpy clothes wait at the entrance for prospective 'customers.' Investigation made by Saturday Tribune revealed that at various hotels located along Cardozo road on the way to Boundary, prostitutes can charge as low as N300 for what is also known as 'sharp-sharp,' while regular customers can be given a discount of N50 for the same duration.
When a lady becomes pregnant in Ajegunle, it is 'he don get belle.' According to some of the residents, it is not uncommon to have ladies who 'carry belle' as early as 17 years of age.
"Here, it is a miracle for a girl to still be a virgin by 15, as most girls are long deflowered before then. It is not uncommon for ladies to become pregnant as early as 17. We live in a community where it is 'every man for himself and God for us all.' We have been practically left on our own by the government. We build our bridges by ourselves and also provide water and security for ourselves," a resident at Boundary area, Chidi Omeize, disclosed.

Mr. Obi Okezie, who claimed to have been living at Ajegunle for over 20 years, disclosed that life there had become a normal thing to him. 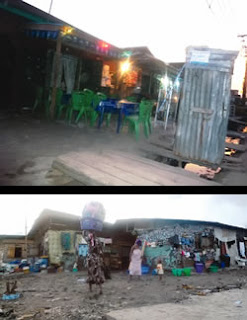 "I have been living here for more than 20 years. I am used to the kind of life people live here, and though, as a man who knows that there are better things in life, I would have loved to live in a better environment, this is where I can afford to stay. I have no regret, and I am happy," he stated.
Another resident, Miss Uche Okafor, who said that she moved to Ajegunle just a few years ago because of circumstances beyond her control, insisted that she could not stop thinking of when she would leave, adding that many sections of the area needed the kind of treatment that was meted out to Maroko some years ago.
"This is not an ideal place where I would ever want to spend the rest of my life. In fact I am here because of something I am going through. As soon as I sort things out, I will leave. Many places have become a haven for criminals, and therefore they need massive purging." she declared, while adding that, "the place is overcrowded and highly congested. There are many houses that have more than thrice the number of people who should ideally be living in them. Security is poor, and almost all the houses here are clustered and people live and move in swarms like bees."
Email ThisBlogThis!Share to TwitterShare to FacebookShare to Pinterest
Labels: Informative, Lifestyle, Nigeria, Places in Africa