Liberia is situated in Western Africa, bordering the North Atlantic Ocean. The landscape in Liberia is characterised by mostly flat to rolling coastal plains, which rise to rolling plateau and low mountains in the northeast. The climate is hot and humid with a lot of rain fall. Winters are dry with hot days and cool to cold nights in Liberia. Summers are wet and cloudy with frequent heavy showers.
Liberia Weather is Hot, tropical climate with little variation in temperature. The wet season runs from May to October. The dry harmattan wind blows from December to March, making the coastal belt particularly arid. Lightweight cottons and linens are worn throughout the year, with waterproofing advised during the wet season.
Liberia was traditionally noted for its hospitality, academic institutions, cultural skills, and arts/craft works.
The population of over 3 million comprises 16 indigenous ethnic groups and various foreign minorities. Indigenous peoples comprise about 95% of the population, the largest of which are the Kpelle in central and western Liberia. Americo-Liberians, who are descendants of freed slaves that arrived in Liberia as of 1821, make up an estimated 5% of the population, of whom half from US origin and half from the Caribbean. There also is a sizable number of Lebanese, Indians, and other West African nationals who make up a significant part of Liberia's business community. A few whites (estimated at 18,000 in 1999; probably fewer now) reside in the country.

The most evocative description of Liberia can be found in Graham Greene’s Journey without Maps, an account of his overland trip across the country in 1935. Although it can now hardly pretend to be an up-to-date guide book, the descriptions and the atmosphere of the country it creates – particularly when dealing with the mysterious and jungle-rich interior – make the book a valuable and entertaining introduction for anyone planning to visit the country.
Monrovia, The capital is a sprawling city on the coast divided by inlets, lagoons and rocky headlands.
The city has several nightclubs, restaurants and bars, centered on the area around Gurley Street. There are several good sandy beaches near the capital.
Around 80km (50 miles) from the capital is Lake Piso, ideal for fishing and watersports. Conducted tours of the Firestone Rubber Plantation, one of the largest in the world, make an interesting day excursion, situated only 50km (30 miles) from Monrovia. Some of the country’s most beautiful beaches can be found at Robertsport. The Kpa-Tawe Waterfalls are four hours 30 minutes’ drive away from Monrovia (a 4-wheel-drive vehicle is recommended).
For wildlife and nature enthusiasts, the Sapo National Park has much to offer: located in Sinoe County, this pristine forest wilderness is home to a great variety of plants and animal species (including elephant, leopard, giant forest hog and the rare pygmy hippo). The park is only accessible on foot (there are no roads) and consists largely of rainforest, which has never been logged, and hence makes it Western Africa’s largest untouched tract of rainforest. The park’s western boundary is formed by the Sinoe River.
Republic of Liberia
Area: 43,000 sq mi (111,370 sq km)
Population (2006 est.): 3,042,004 (growth rate: 4.9%); birth rate: 44.8/1000; infant mortality rate: 155.8/1000; life expectancy: 39.6; density per sq mi: 82
Capital : Monrovia
Currency : Liberian dollar
Languages: English 20% (official), some 20 ethnic-group languages
Ethnicity: indigenous African tribes 95% (including Kpelle, Bassa, Gio, Kru, Grebo, Mano, Krahn, Gola, Gbandi, Loma, Kissi, Vai, Bella, Mandingo, and Mende), Americo-Liberians 2.5% (descendants of former U.S. slaves), Congo People 2.5% (descendants of former Caribbean slaves)
Religions: traditional 40%, Christian 40%, Islam 20%
Literacy : 58%
_______________________________________
Ma Ellen must succeed !
Sent by: GEORGE-KAMARA Nunwin P. - Liberia
"... Ma Ellen, as she is affectionately called, personifies the actual strength, beauty, and humanity of the LIBERIAN PEOPLE. Her success is ours, and likewise, her failure.
We must lend her our all to ensure that she succeeds...." 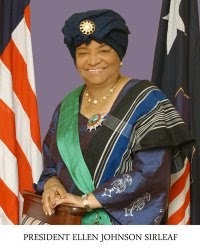 Ellen Johnson Sirleaf was inaugurated President of Liberia on January 16, 2006 after a successful win of a well contested free and fair election in October and November, 2005. After years of fighting for freedom, justice and equality in Liberia, spending time in jail and being forced into exile more than once, President Ellen Johnson Sirleaf is now entrusted with the most challenging task any Liberian leader has ever faced – rebuilding a post-conflict nation. She has revived national hope and restored Liberia’s international reputation and credibility. Through her leadership, the Government has identified four Pillars in support of its development agenda: Peace and Security, Economic Revitalization, Governance and the Rule of Law, and Infrastructure and Basic Services.

National peace has been consolidated by strengthening key institutions of national security and completing the process of demilitarization, demobilization, training and reintegration of ex-combatants.
The President’s leadership has resulted in the lifting of U.N. sanctions on the country’s diamond and forestry sectors and the successful renegotiation of multi-million dollar concession agreements with ArcelorMittal and Firestone. Several other investment proposals for the re-opening of traditional economic activities in the mining and agriculture sector are underway. The country is well on the way to receiving relief for the USD$4.7 billion debt under the HIPC arrangement and is qualified for AGOA and threshold status under the Millennium Challenge Account.

President Johnson Sirleaf’s strong bipartisan support from the U.S. has resulted in Liberia’s inclusion in two supplemental budgets and to her well recognized speech at a Joint Meeting of Congress on March 15, 2006. In recognition for her tireless efforts to make Liberia a post-conflict success story, she was awarded in 2007 the coveted United States Presidential Medal of Freedom, the highest civilian honor bestowed by an American President.

President Johnson Sirleaf began her career in banking and economic and financial management in 1965 at the then Treasury Department in Liberia. In 1979, as Minister of Finance of Liberia, she spearheaded the move to curb the mismanagement of Government finances and mobilize external resources for Liberia’s development. After the military coup of 1980, she served as President of the Liberian Bank for Development and Investment (LBDI), Vice President of CITICORP’s Africa Regional Office in Nairobi and Senior Loan Officer at the World Bank where she was an initial member of the World Bank Council of African Advisors. In 1985, she took a sabbatical to contest for a seat in the Liberian Senate. She was placed under house arrest and then sentenced to ten years in prison for speaking against the Samuel Doe regime. After being incarcerated for a few months, she was released in response to strong protest and petition from Liberian women and the international community. She then fled to the United States and served as Vice President for Equator Bank and in 1992 she joined the UNDP as Assistant Administrator and Director of its Regional Bureau of Africa with the rank of Assistant Secretary General of the United Nations. She left that post in 1997 to run as a Presidential candidate.

In 2003 when the National Transitional Government of Liberia (NTGL) was formed, Johnson Sirleaf was selected to serve as Chairperson of the Governance Reform Commission where she led the country’s anti-corruption reform by changing the reporting mechanism of the General Auditing Commission from the Executive to the Legislature, thereby strengthening and reinforcing its independence.

President Johnson Silreaf was born in Monrovia and attended the College of West Africa. She holds a Masters in Public Administration from the Kennedy School of Government, Harvard University, a Diploma from the Economics Institute of the University of Colorado and a Bachelor of Business Administration from Madison Business College. She has received seven Honorary Doctorate degrees from universities around the world and is founder and chief supporter of Measuagoon, a community development NGO in Liberia.

She is the proud mother of four sons and has nine grandchildren.

Ma Ellen, as she is affectionately called, personifies the actual strength, beauty, and humanity of the LIBERIAN PERSON. Her success is ours, and likewise, her failure.

We must lend her our all to ensure that she succeeds.