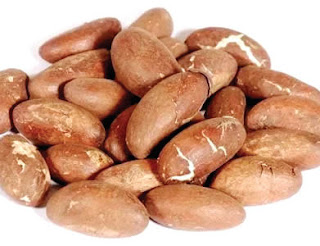 Garcinia kola or in simple terms, bitter kola originated from West and Central Africa. Signifying the importance of this second largest continent, it produces many healing wonders for us.

Garcinia kola belongs to the species of a tropical flowering plant. It produces brown, nut like seeds, similar looking to kidney beans.

Lungs, the internal organ carry one of the most critical functions of the body. It helps us to breath.

The considerate amount of regular consumption of the seed helps in strengthening the fibers and the lung tissue, stabilising any counter effects.

It further assists in maintaining a good respiratory track and treats chest colds. It has a favorably high antioxidant content for a healthy body.

So, if you are a smoker or even a passive smoker, definitely this is the 'cure'.

Kolaviron is an anti-oxidant and anti-inflammatory phytochemical. Kolaviron is a major constituent of garcinia seed which helps in treating malaria.

No wonder, the traditional healers suggest this for an easy and free cure, straight from the mother nature.

There are no definite side effects of having this naturally occurring blissful plant. But, anything in excess or wrong proportion may show its evil side. On certain occasions, consumption of bitter kola is found to have some side effects.

Certain bodies might just prove allergic to the plant and develop certain reactions. In such cases, it is advisable to consult a doctor and stop use.

As science advances and disease prevention becomes the norm rather than the exception, experts all over the world are examining the various food categories available to mankind, with the aim of identifying the health-giving properties inherent in each, and developing them in supplement forms.
Called food supplements - as opposed to synthetic multivitamins - they help in keeping sicknesses at bay, unlike the medicines of yore that are mostly indicated in the treatment of diseases.

Modern medical trends, physicians say, now tend towards disease prevention through foods, hence the often quoted words of the father of modern medicine, Hippocrates, who admonished, "Let food be thy medicine and medicine be thy food."

The majority of people who wish to eat healthy may also miss out on the fact that cooking sometimes destroys or reduces certain elements that should nourish the body. Nutritionists say while some foods are better eaten cooked, some - such as fruits and certain vegetables - are better eaten raw in order to make us get the most of each nutrient.


Again, some plant-based foods that may also serve as snacks or occasional foods have a lot they can achieve for mankind in the hands of seasoned scientists.
Such is the bitter kola, botanically called garcinia kola (orogbo in Yoruba), which has become a household name in the prevention and treatment of ailments such as arthritis, reduction of eye pressure, treating hangover and improving lung function.
According to a Professor of Pharmacognosy, Maurice Iwu, who is also the Chief Executive Director of Bioresources Development Group - a research-based outfit that has developed many medicinal African plants into viable dietary supplements marketed under the aegis of Intercedd Health Products - the traditional use of plants for medicinal purposes serve specific functions, either in disease prevention or treatment, hence the global recourse to plant-based medicines.

He says plant-based supplements are referred to as nutraceuticals; that is "substances that may be considered food or part of a food and provide medical or health benefits, including the prevention and treatment of diseases."
One of such is the bitter kola, which has been developed into a product called the Cold Cap.
Generally used as a social snack and offered to guests in some cultural settings, bitter kola has been indicated in the treatment of laryngitis, general inflammation, bronchitis, viral infections and diabetes.
Iwu says the kola, when processed into food supplement, also serves as rejuvenating agent and general antidotes for certain conditions.

Improved respiratory function
Indeed, a study published in The Internet Journal of Pulmonary Medicine and authored by Mr. David Ofusori of the Igbinedion University, states that "garcinia kola improved respiratory function after 28 days of use of a garcinia extract on laboratory rats."
Ofusori and his team depose that bitter kola works by dilating the alveolar ducts and sacs in the lungs by improving the strength of the fibres in the lung tissue.
Indeed, users say they have had lasting relief from chesty coughs by merely eating a lobe of bitter kola.

Bitter kola aficionado, Mrs. Tokunbo Benson, says the first time a friend advised her to chew the bitter kola when she saw her cough endlessly, she doubted its efficacy but tried it anyway. That was after she had taken an assortment of cough mixtures that didn't seem to have any positive effect on the condition. Such is the power of bitter kola.
Iwu confirms that "Bitter kola is a food supplement and an anti-infective agent in the management of cold, bronchitis and reduction of congestion of the upper respiratory tract."
He says since many people may not be able to withstand the bitter taste of the kola, having it in food supplement form without any form of unnatural enhancement makes it durable for use at all times.

Reduced eye pressure
Ophthalmologists say intraocular pressure (eye pressure) is usually present, even among patients with normal vision range, and that if it's not controlled, it can lead to glaucoma, which, in turn, can lead to blindness if not attended to with the urgency it deserves.
Also called ocular hypertension, the condition usually refers to any situation in which the pressure inside the eye is higher than normal.
And while the average physician would readily prescribe over-the-counter eye medications, researchers at the Lagos University Teaching Hospital, Idi-Araba, tested the effectiveness of eye drops that contain 0.5 per cent extract of garcinia kola.
The results of the study, published in the Middle East African Journal of Opthamology, showed that "the opthamolic solution that contained the garcinia significantly reduced eye pressure when used twice a day."

Detoxification
Experts say that bitter kola, as supplement, has a detoxifying effects on the body. "It does this by cleaning the liver, gall bladder, and the entire body system," Iwu says; adding, "it actually reduces the absorption of poison in the body."

Libido enhancement
Experts in human sexuality warn that when men develop hardening of the artery as a result of wrong diets, it affects their sexual performance, as blood circulation to vital organs of the body, including the penis, will be greatly hindered.
However, researchers say, by taking bitter kola supplement, impotence can be reversed, "as it increases blood supply to the core area in men who have hardening of the arteries."
Iwu assures, "Bitter kola is the number one sexual performance medicine for men. Indeed, few natural products can match the sexual benefits of bitter kola."

Relieve arthritis
Physicians describe osteoarthritis as the common form of arthritis, being characterised by pain, inflammation and limited movement in the joints. Generally, arthritis worsens with age, and the earlier it is diagnosed and confronted head-on, the better for the patient.
Experts say women are more likely to develop rheumatoid arthritis, compared to men.
A team of researchers from Obafemi Awolowo University, Ile-Ife, Osun State, led by Olayinka Adegbehingbe, published their findings in the Journal of Orthopaedic Surgery and Research, to the intent that garcinia kola significantly reduces inflammation and pain, while also aiding increased joint movements among patients who exhibit osteoarthritis symptoms.
"It is believed that garcinia kola works well as a result of its antioxidants properties," the scientists submit.

Taling in support of natural supplements, a physician, Dr. Deji Oshagbemi, says by the time we clock 35 years of age, our bodies may not absorb as much nutrients as necessary in the body, hence the need to supplement our nutrition with natural, plant-based supplements.
The beauty of natural food supplements, scientists avow, is that they don't have side effects on users because they are devoid of artificial additives that sometimes go with the manufacture of many drugs.
Email ThisBlogThis!Share to TwitterShare to FacebookShare to Pinterest
Labels: Advisory, Health and fitness, Sex and life