Algeria (French Algerie), officially Democratic and Popular Republic of Algeria, republic of western North Africa; bounded on the north by the Mediterranean Sea; on the east by Tunisia and Libya; on the south by Niger, Mali, and Mauritania; and on the west by Morocco.

Its total area is 2,381,741 sq km (919,595 sq mi).Algeria has four main physical regions, which extend east to west across the country in parallel zones. In the north, along the Mediterranean coast and extending inland for 80 to 190 km (50 to 120 mi), is the Tell. The region consists of a narrow and discontinuous coastal plain backed by the mountainous area of the Tell Atlas, a range of the Atlas Mountains system. 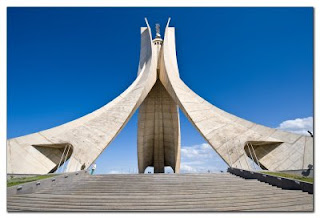 Martyrs of the Algerian War

The numerous valleys of this region contain most of Algeria’s arable land. The country’s principal river, the Chelif (725 km/450 mi long), rises in the Tell Atlas and flows to the Mediterranean Sea; no permanent streams are found south of the Tell. The next region, lying to the south and southwest, is the High Plateau, a highland region of level terrain. Several basins here collect water during rainy periods, forming large, shallow lakes; as these dry they become salt flats, called chotts, or shatts. South of this lie the mountains and massifs of the Saharan Atlas. The fourth region, comprising more than

90 percent of the country’s total area, is the great expanse of the Algerian portion of the Sahara. Much of the terrain is covered by gravel, although the Grand Erg Oriental and the Grand Erg Occidental are vast regions of sand dunes. In the south, rising above the desert, are the Ahaggar Mountains, which culminate in Mount Tahat (3,003 m/9,852 ft), the highest peak in Algeria.