See what our music stars are doing to the world: They ignite fire from Lagos to the whole world

By Ehi Braimah
(Braimah is a public relations and marketing strategist based in Lagos)
VANGUARD Nigeria. Saturday, March 23, 2019

On election day for governors in 29 States and State Houses of Assembly seats on Saturday March 9, 2019, my family and I were having a late breakfast at about noon and Trace Naija, the popular music channel on DSTV, was on and featuring songs by top Nigerian artistes.

Then I popped this question to no one in particular: who is your favourite Nigerian music artiste and why? My daughter, a keen music follower with her eyes on media arts as a possible future vocation, answered me and announced Wizkid and Davido because of the lyrics, beat, tempo and rhythms of their songs. Wow, I exclaimed! She explained further that their songs are popular and relate well with a youthful audience.

From Lagos to Accra, Nairobi, Dubai, Johannesburg, Cape Town, London, Toronto, Houston and Atlanta, just to name a few places, Nigerian music, sometimes branded as Naija music, has created a new culture of entertainment, excitement and enjoyment as popular dance hall music in those places. Be it a bar, nightclub, lounge or restaurant, music lovers gyrate to the beat coming out of the sound monitors that are recognised and celebrated as Nigerian music.

Two years ago in Nairobi, my host Uche and I visited Club 40/40, Kiza Lounge and Black Diamond where 'Naija' pop music is played steadily. I had the same experience in Atlanta, USA, last October when Ernest, Ralph and I visited Sage restaurant, Little Lagos restaurant, Buckhead Loft, Whiskey Mistress and Regent Lounge.

I'm told that new lounges and restaurants such as Blue Lagoon and Ace also celebrate Nigerian music by Wizkid, Davido, Run Town, Olamide, Tekno, Burna Boy and so on. The effect is usually spontaneous – you just get up and begin to shake your body without any prompting to the unmistakable beats in the songs. The beats give the songs a unique Nigerian identity - a product exported from Nigeria.

When Dr. Reuben Abati interrogated this subject about 10 years ago in the Guardian as the newspaper's editorial board chair and columnist, he wrote that the lyrics in the music by most Nigerian artistes were meaningless and disgusting. The reactions from different quarters, especially the music industry, were swift and defiant and the matter became highly controversial at the time.

The artistes and their promoters fought back vehemently, challenging Dr Abati to a dwell in the court of public opinion and he had to publish countless rejoinders on the matter. Between then and now, the successes of our pop music stars have been remarkable and their achievements profound, thereby earning recognition globally.

Even if you do not agree with content and messaging strategy of the lyrics, the fact remains that the music produced is very popular, enjoyable and hilarious to the music consumer, and very danceable, too. There was a gap our artistes identified which they filled and the result was the big bang effect - they suddenly became popular and began to make waves, and they have never looked back since then.

Popularity and celebrity status varies among the music stars. Fame, which usually comes with a price, may come too early for some of our rising and well established stars, and when there is no consistency in their respective musical repertoire or when the successes achieved are not properly managed, it could spell trouble and declining fortunes may set in.

Stardom means experiencing a new world of bling bling, living in luxurious homes, making significant fashion statements, driving exotic cars and hiring private jets. For the male folks, women are never in short supply; being super stars actually means living life to the fullest. As the discussions continued over the late breakfast, my daughter revealed a Vanguard newspaper story where Mark Dayton, governor of Minnesota in the United States of America, declared October 6 every year as Wizkid Day. That's truly a big deal. It is remarkable.

Before I eventually decided to write on Mrs. Winifred Madikizela Madela who recently translated, to the Great Beyond, one question repeatedly exercised my mind: "Is it necessary to write a tribute about her?" 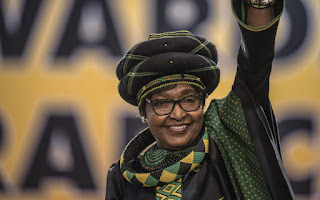 Two principles decided my conclusion: "It is better to err on the side of forgiveness", and also: "To err is human, to forgive is Divine".

Therefore, I chose to forget whatever misdeeds that she might have committed towards the end of her turbulent matrimony with her legendary husband, Nelson Mandela Besides, only the Almighty can forgive us our trespasses.

On April 2, 2018, at the Netcare Milpark Hospital, Johannesburg, South Africa, Mrs. Winifred Mandela breathed her last, as a result of a long term illness, Life is journey.

And the couple's martial life was a dramatic irony because neither of them ever envisaged their separation at the time that it occurred. How did the martial relationship begin? According to Nelson, in his life time, they met one afternoon.

"As I drove a friend of mine from Orlando to medical school at the University of the Witwatersrand, passing a bus stop, I noticed out of the corner of my eye a lovely young woman waiting at a bus stop.

Struck by her beauty and I turned my head to get a better look at her, but I had gone by too fast. Her face stayed with me and considered turning around to drive by her in other direction, but I went on."

Weeks after, by a miraculous coincidence, Nelson Mandela met the young woman again at the law chambers of Oliver Tambo who introduced him to her and her brother, with the explanation that they were on a legal matter. That was the beginning of the relationship between Nelson and Namizamo Winifred Madikizula.

She attended Jan Hofmeyr School of Social Work in Johannesburg and was working as the First Black female social worker at Baragwanah Hospital.

Coincidentally, the xenophobic attacks have been occurring in the tenure of President Jacob Zuma. They did not occur when Dr Nelson Mandela or Mr Thabo Mbeki were in office. One can infer that the body language of Zuma has been encouraging the attacks. Maybe, if he had shown some righteous anger against the attacks or ensured that the perpetrators are severely punished, they would not have recurred.

Ironically, Nigerians have been expressing their anger over the xenophobic attacks. Many commentators remind South Africans the sacrifices Nigeria and other African nations made to end apartheid in South Africa, including hosting many leaders of the African National Congress as well university students from South Africa.


However, the reason the action of the South Africans is shocking to many Nigerians is that we have a track record of not attacking foreigners within Nigeria. Nigerians even treat foreigners better than they treat fellow Nigerians. For example, in spite of the number of times Nigerian football clubs and national teams have been attacked while in other countries, Nigerians usually don't attack foreign teams. On the contrary, on many occasions, during some international matches, Nigerian football fans are known to have swapped support from the national team to the visiting teams if they are not impressed with the performance of the national team. Even if a visiting team beats the Nigerian team or prevents Nigeria from qualifying for an international competition, such a team can even take a victory lap round the stadium without even a bottle of water thrown at them.

A 22-year-old model, who had visited 22 countries, once told me this of Cape Town: "So beautiful...The most beautiful city on earth." Coming from Sandra Omo, Nigerian-born international model-cum-actress who played the role of a slave girl in the Oscar-nominated TV drama series, Secret of The Dead: Slave Ship Mutiny, I have no reason to challenge her assertion, for she once lived for six months in Cape Town.
However, it turned out the statement was no exaggeration; rather I found it an understatement. The magnificence of Cape Town cannot be adequately captured by such word as 'beautiful', neither would a lengthy ode do justice to its splendour. If Cape Town were to be a piece of classical music, anybody trying to describe it with words-regardless of the pathos and poetry of the language-is merely attempting a poor remix of the original version. The city, from its building architecture to the general landscape, is a blend of picturesque view and a slice of the surreal. Cape Town is at once trendy and futuristic. Its beauty leaves you giddy. The recent 2012 Telegraph Travel Awards ranked Cape Town as the No 1 Favourite Worldwide City even ahead of New York. Any view of the city is picture-perfect with postcard prospects. Thinking of a model city? Cape Town ticks all the boxes.