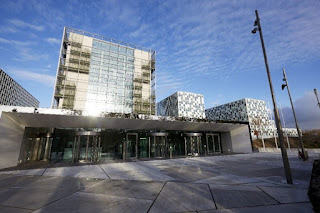 
The widely expected judgement slapped Pretoria for failing in its obligations and hindering the work of the world’s only permanent war crimes tribunal, of which it is a founding member.

“The chamber concludes that by not arresting Omar al-Bashir while he was on its territory… South Africa failed to comply with the court’s request for the arrest and surrender” of the Sudanese leader, said presiding judge Cuno Tarfusser..


This was “contrary” to the provisions of the court’s guiding Rome Statute and prevented it from seeking to prosecute Bashir on 10 charges of war crimes, including three of genocide in Sudan’s western Darfur region.


But the judges stopped short of referring the matter to the UN Security Council for further action, with Tarfusser saying “a referral would be of no consequence”.

Despite two international arrest warrants issued in 2009 and 2010, Bashir remains at large and in office as conflict continues to rage in Darfur.

In June 2015, he attended an African Union summit in Johannesburg, and despite earlier consultations between ICC and South African officials then flew out of the country again unhindered.

The UN Security Council asked the ICC in 2005 to probe the crimes in Darfur, where at least 300,000 people have been killed and 2.5 million displaced since ethnic minorities took up arms against Bashir’s Arab-dominated government in 2003, according to UN figures.

Pretoria’s lawyers had argued at an April hearing at the ICC there “was no duty under international law on South Africa to arrest” Bashir, arguing there was “nothing at all” in the UN resolution to waive his diplomatic immunity.

But ICC prosecutor Julian Nicholls shot back that South Africa “had the ability to arrest and surrender him and it chose not to do so.”

In the end, the only reason Pretoria did not arrest him was that South Africa “disagreed with … the law as set out… so it did not comply,” he said.

Judges agreed in Thursday’s ruling that international obligations cannot “simply be put aside” if a country disagrees with them, and ruled that in this case Bashir did not enjoy immunity.

By this time in 2007, a lanky black man was making political waves as a presidential candidate in the US Democratic Party's primaries. Even after he won the Iowa straw polls - the traditional kickoff of the presidential election season - he was still generally regarded as a flash in the pan. Well, he went on to win more primaries and ultimately the presidency and got re-elected four years later. We are talking, of course, of Barack Obama.

Obama's triumph in 2008 places very high on the scale of the improbable. Even higher on that scale would be the reprise of that feat in 2016 by another black man. Well, Ben Carson, a retired world-famous neurosurgeon is poised to do just that. Carson is vying for the presidency from the opposite ideological spectrum, the Republican Party. And in a CBS/New York Times poll released on Tuesday, he is running a close second in the Republican primaries to billionaire real estate mogul Donald Trump.

In many ways, Obama and Carson are a study in contrast. Sure, they are both highly credentialed professionals and they both were raised by their mothers, but that is very much all they have in common. That and their race, of course. As to ideology and political background, they differ markedly.

Obama seems to have been born with politics in his vein. He became active in politics early in life as a community activist and moved rapidly upward from there. Carson, on the other hand, kept politics at a distance. He focused on his medical career, becoming the first surgeon to successfully separate twins who were joined at the head. He didn't join a political party until 2014, and only in preparation to run for the presidency.

Obama is an ultra liberal, who harnessed the angst of youth, minorities, women and gays to catapult him into office. Carson is a social and political conservative who appeals more to the mainstream. Obama galvanised supporters with the slogan, "Yes, we can." But to his more liberal policies, Carson would say no you don't.
Read more...
No comments:
Email ThisBlogThis!Share to TwitterShare to FacebookShare to Pinterest
Labels: America, Columnists, Politics, View point

For Nigerian traders in Ghana, it's still no respite in sight

AJAYI OLUWAPELUMI in Ghana writes about the frustration of the affected Nigerians.

Nigerian traders in Ghana have been under pressure to move out by the local authorities at the instance of their Ghanaian counterparts.

The year 2014 has no doubt being  one of turbulence and instability for Nigerian traders in 10 regions of Ghana, as the Ghana Ministry of Trade and Industry threatened to implement the Ghana Investment Promotion Centre (GIPC) Act, 2013 (Act 865) which prohibits foreign traders from trading in its 48 markets across the country.
Nigeria and other ECOWAS member countries are recognised by Ghana constitution as foreign.

In June this year, it was reported that thousands of members of Ghana Union of Traders Association (GUTA), both in the capital city of Accra and Ashanti region of Kumasi, turned up the pressure being mounted on the foreign traders, mostly Nigerians by locking up their shops.
The situation was, however, checked through the intervention of Ghana police, which saw the foreign traders return to their shops without hindrance.
However respite for the traders seemed short-lived as the ministry that has the power to eject the traders, in September, issued a 30-day ultimatum for all foreign traders to quit the local markets or else face eviction and be prosecuted in a court that will be set up to prosecute foreign retail traders.
Read more...
No comments:
Email ThisBlogThis!Share to TwitterShare to FacebookShare to Pinterest
Labels: Africa, Commerce, Ghana, Nigeria, Politics
Older Posts Home
Subscribe to: Posts (Atom)